Normally, we rely on our friends and loved ones to plan our birthday celebrations, but Marvel Comics is taking matters into their own hands, sending out a press release announcing that they will plan their own birthday party on August 31st. That’s the same week that Marvel Comics #1000 hits stores, but it was August 31st 1939 when Marvel Comics #1 was originally released, and thus the start of Marvel Comics… more or less[1].

In any case, Marvel promises to act really surprised when they show up for the big event, which will feature a weeklong celebration at various retailers. “Oh, guys, you didn’t have to do all this,” they’ll probably say. “There’s no need to make a fuss over us.”

Check out the press release below for more details.

MARVEL CELEBRATES ITS BIRTHDAY ON AUGUST 31!

August 31 marks the anniversary debut of Marvel Comics #1 – and the extraordinary beginning of the Marvel Universe.

New York, NY—July 26, 2019— On August 31, 1939, Marvel Comics #1 opened the doors to the Marvel Universe for the first time ever, creating a tapestry of Super Heroes and stories that have gone on to shape pop culture for generations of fans around the world. As Marvel continues to celebrate its 80th anniversary this year, join fans everywhere to celebrate MARVEL’S BIRTHDAY on August 31 – starting with an all-new commemorative piece of art by comic book legend Adam Kubert!

“Going back to Marvel’s inception in 1939, Marvel Comics #1 was the spark that led to the Marvel Universe we know today,” said Dan Buckley, President of Marvel Entertainment. “As one of the most influential milestones in Marvel history, August 31 is the perfect day to officially honor Marvel’s birthday.”

Marvel will be celebrating its birthday with a week of festivities and events at various retailers and Marvel exhibitions & experiences, including the historic debut of MARVEL COMICS #1000!

“For myself and almost every other comic book fan around the world, Marvel’s beloved comics and characters have been a part of our lives for as long as we can remember. But it all started with the Human Torch.” said C.B. Cebulski, Editor-in-Chief of Marvel. “As we salute Marvel’s 80th anniversary this year, we’re excited to celebrate Marvel’s official birthday!”

As a massive, oversized, special edition book, MARVEL COMICS #1000 will feature the greatest array of luminaries from both classic and current comic books (and beyond!), revealing a long-kept secret and some startling discoveries along the way. Participating comic shops will be hosting Marvel birthday party events and will have a brand-new edition of the MARVEL UNIVERSE MAGAZINE available free to customers. This magazine will feature exclusive art and behind-the-scenes content for some of Marvel’s top comic releases in the fall, so readers will surely want to pick this up along with MARVEL COMICS #1000!

In addition to comic shops, stores around the country including Disney store, Amazon, Box Lunch and FYE will be hosting Marvel birthday celebrations with new and exclusive merchandise, special offers, giveaways and more! Additional details and activations will be revealed in the coming weeks.

For 80 years, Marvel has reflected the world outside your window – inspiring millions of fans with iconic characters and timeless stories that brought the Marvel Universe to the forefront of pop culture today. Celebrate Marvel’s historic 80th Anniversary all year long with your favorite Marvel comics, games, shows, collectibles, fashion, and more! 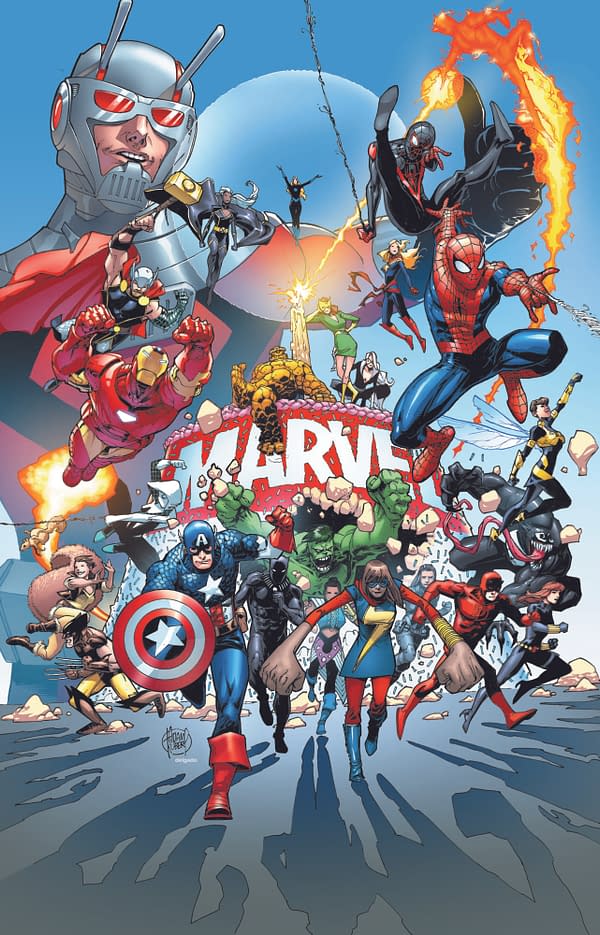 A prophecy once said that in the comic book industry’s darkest days, a hero would come to lead the people through a plague of overpriced floppies, incentive variant covers, #1 issue reboots, and super-mega-crossover events.

Sadly, that prophecy was wrong. Oh, Jude Terror was right. For ten years. About everything. But nobody listened. And so, Jude Terror has moved on to a more important mission: turning Bleeding Cool into a pro wrestling dirt sheet!

Acquire this Domain
You can acquire this site’s domain name! We have nurtured its online marketing value by systematically curating this site by the domain’s relevant keywords. Explore our content network – you can advertise on each or rent vs. buy the domain. Buy@TLDtraders.com | Skype: TLDtraders | +1 (475) BUY-NAME (289 – 6263). Thousands search by this site’s exact keyword domain name! Most are sent here because search engines often love the keyword. This domain can be your 24/7 lead generator! If you own it, you could capture a large amount of online traffic for your niche. Stop wasting money on ads. Instead, buy this domain to gain a long-term marketing asset. If you can’t afford to buy then you can rent the domain.

About Us
We are Internet Investors, Developers, and Franchisers – operating a content network of several thousand sites while federating 100+ eCommerce and SaaS startups. With our proprietary “inverted incubation” model, we leverage a portfolio of $100M in valued domains to impact online trends, traffic, and transactions. We use robotic process automation, machine learning, and other proprietary approaches to power our content network. Contact us to learn how we can help you with your online marketing and/or site maintenance.

Your browser sent a request that this server could not understand.
Size of a request header field exceeds server limit.

Your browser sent a request that this server could not understand.
Size of a request header field exceeds server limit.

This website uses cookies to improve your experience while you navigate through the website. Out of these cookies, the cookies that are categorized as necessary are stored on your browser as they are essential for the working of basic functionalities of the website. We also use third-party cookies that help us analyze and understand how you use this website. These cookies will be stored in your browser only with your consent. You also have the option to opt-out of these cookies. But opting out of some of these cookies may have an effect on your browsing experience.
Necessary Always Enabled
Necessary cookies are absolutely essential for the website to function properly. This category only includes cookies that ensures basic functionalities and security features of the website. These cookies do not store any personal information.
Non-necessary
Any cookies that may not be particularly necessary for the website to function and is used specifically to collect user personal data via analytics, ads, other embedded contents are termed as non-necessary cookies. It is mandatory to procure user consent prior to running these cookies on your website.
SAVE & ACCEPT
Generated by Feedzy